The L2TP Client in MikroTik RouterOS versions 6.83.3 and 6.37.4 does not enable IPsec encryption after a reboot. This allows eavesdroppers to view the transmitted data unencrypted. It also allows eavesdroppers to obtain L2TP client secrets and then establish tunnels to the L2TP servers, gaining unauthorised access to the networks they provide access to.

The L2TP Client in MikroTik RouterOS versions 6.83.3 and 6.37.4 does not enable IPsec encryption after a reboot. This allows eavesdroppers to view the transmitted data unencrypted. It also allows eavesdroppers to obtain L2TP client secrets and then establish tunnels to the L2TP servers, gaining unauthorised access to the networks they provide access to.

RouterOS is a versatile operating system, as you might guess primarily intended to run as a router. It is a modified version of Linux, where access to traditional GNU/Linux userland is not generally possible, and the device is instead maintained and configured through its own CLI, web interface, Windows GUI application (“WinBox”), and API. RouterOS primarily runs on MikroTik / RouterBOARD hardware; however you can also download it as an x86 virtual machine, branded Cloud Hosted Router or CHR.

RouterOS is used by both individuals and businesses. Hobbyists often run it on MikroTik hardware in homelabs as – compared to other routers priced for home use such as the DrayTek Vigor range – they are extremely powerful but also very affordable. Businesses use them as affordable and powerful alternatives to Cisco hardware.

RouterOS supports various VPN and tunnelling protocols, including PPTP, L2TP, SSTP, OpenVPN. As well as being able to operate as a server for these tunnels (as is standard for a router), it can also operate as a VPN client. 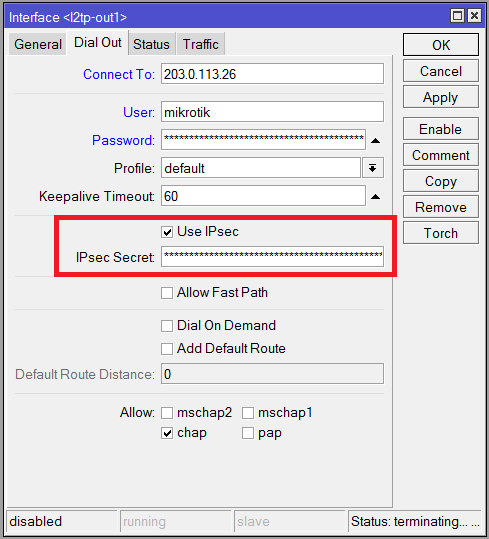 In normal operation, when you enable an L2TP Client interface with IPsec enabled, RouterOS first attempts to establish an IPsec tunnel to the specified server. If the IPsec tunnel is successfully established, all L2TP traffic is transmitted through this tunnel – including the L2TP authentication and any subsequent traffic. If the IPsec tunnel is not successfully established, no L2TP connection is attempted. If you disable and re-enable the L2TP Client interface, this process repeats.

However, if you configure and enable an L2TP Client interface with IPsec enabled and then reboot the router, RouterOS attempts the L2TP Client connection directly; not through IPsec. If the L2TP server does not accept connections without IPsec, then the connection fails and the tunnel is never established until one disables and re-enables the interface. However if the L2TP server also accepts connections without IPsec, an unencrypted L2TP tunnel is successfully established.

There is no direct feedback to the user that the L2TP tunnel has been established without IPsec encryption. One can tell as follows:

This bug has two main consequences.

First, all of the traffic between the RouterOS L2TP Client and the L2TP server is unencrypted (without the user being made clearly aware), and can be intercepted by eavesdroppers on the wider internet with the relevant access. Privacy is the core expectation of using a VPN, so this is gravely unacceptable behaviour.

By analogy, this bug is similar to if you tell your web browser to go to TLS-encrypted https://www.example.com, but it instead goes to unencrypted http://www.example.com. Now, these days many websites and web servers have measures to ensure that HTTPS is used and HTTP connections never take place. It’s good that webmasters are doing this “for the greater good”, but that doesn’t somehow make it the server’s responsibility – if the client is told to use encryption, it should use encryption. At bare minimum, it should warn the user if an encrypted session is not established and an unencrypted one is going to be used instead. Similarly, while it is certainly a best practice for an L2TP/IPsec server to prevent unencrypted L2TP connections, it’s not their responsibility to the client to do so.

Second, the L2TP authentication process is also unencrypted, which can allow an eavesdropper to compromise the L2TP server and/or network behind it.

In more detail, RouterOS can perform PPP authentication with PAP, MS-CHAP (v1 or v2), or CHAP.

With PAP and MS-CHAP, the password is as good as given to the eavesdropper. With CHAP, it depends on the strength of the password. Overall, an eavesdropper has a much easier time obtaining the L2TP password, which will allow them to impersonate the user to the L2TP server and establish an L2TP tunnel. Depending on the configuration of the L2TP server, this may give them access to internal networks intended to be protected from the outside world.

The simplest proof of concept involves using two RouterOS instances – one as the L2TP server and one as the L2TP client. The RouterOS L2TP server has to have IPsec either enabled or disabled – it cannot be configured to accept both encrypted and encrypted L2TP connections at the same time – so it is configured with IPsec disabled. An L2TP client with IPsec enabled should thus fail to connect to this server, however after a reboot it does not.

A different proof-of-concept more similar to real-world scenarios can be created using a Linux server using libreswan and xl2tpd, and not including iptables rules on the INPUT chain to drop port 1701 traffic that does not have an IPsec policy. (This script is very useful for creating this configuration – remove any DROP rules for port 1701 after running it). Such a server will accept L2TP connections either with or without IPsec. Configuring the RouterOS L2TP Client correctly with IPsec enabled will establish L2TP/IPsec connections successfully in normal operation, as well as establish unencrypted L2TP connections without IPsec after a reboot.

RouterOS maintains two stable branches – “Current” and “Bugfix”. This vulnerability has been demonstrated on both the latest Current (v6.83.3) and the latest Bugfix (v6.37.4) at the time of writing. It is likely present in older versions as well.

MikroTik Support have confirmed to me by email that this will be fixed in an upcoming version.

There are a few workarounds and mitigations:

MikroTik do not appear to have a specific method for reporting security vulnerabilities, so I contacted them through their support email address on their website. Overall, contact with MikroTik has had both positives and negatives.

On the positive side, support were very responsive and very polite. They agreed that the vulnerability can be publicly disclosed immediately so as to warn their customers, and they certainly didn’t make any threats in relation to the disclosure. They didn’t ask for any proof of ownership of a RouterOS licence or RouterBOARD product, which is normally a requirement for support according to their website.

On the negative side, MikroTik do not seem to have the appropriate procedures in place to handle vulnerability disclosure. In particular there is no real way to securely communicate with them. They did not offer GPG keys. It seems very likely that the HTTPS form on their website simply generates an email that is sent to them, in all likelihood also unencrypted, and it’s a one-off form rather than a messaging portal – the conversation continued over email. Furthermore, they requested the supout.rif file that RouterOS generates to assist in support issues, which I have discovered includes sensitive information such as IPsec secrets in plain text. They also seemed to put the onus on me to fully prove the bug – this is understandable if they have a bug bounty program, but as far as they know they do not, so they were relying on my goodwill.

The technical ability of RouterOS’s “end-users” is generally quite high, so they are easily able to apply one of the workarounds / mitigations above, almost as easily as they would apply RouterOS updates. Given this, and the fact that RouterOS does not update automatically, there is little security benefit to delaying disclosure until MikroTik release the update with the bug fixed. Disclosing this vulnerability now has the greater security benefit of allowing RouterOS L2TP Client users to put in place suitable mitigations prior to MikroTik fixing the bug.