Every Exchange administrator has probably faced this scenario at least a few times:  You have an email address, and need to find out – who does it belong to?

Back when Exchange was new to you, you probably started by making educated guesses using the Exchange Management Console or Exchange Admin Center.  “It looks like a user, so let’s look at users.  Hmm, not there, I guess I’ll check groups.  Not there either.  I guess I’ll check shared mailboxes…”

You’ll find it eventually, but for me this is a much quicker problem to solve.  You load up Exchange PowerShell…

…and now you know it’s a Mail Contact. (Or a Mail User, or a Distribution Group, etc.). Easy. As far as I know, there is no GUI way in Exchange on-prem or Online that is anywhere near as fast as this (assuming you’ve streamlined your connecting to Exchange PowerShell). The Get-Recipient cmdlet allows you to easily search all Exchange recipient types (user, group, shared mailbox, contact, …) by various identities (Name, Display name, Alias, Distinguished name, Email address, GUID).

This isn’t the only scenario where we need to search for multiple types of object, so I like to extend this further. I like to create cmdlets that will search multiple products (or directories or whatever you want to call them) and output a merged object.

For example, in the past I have done this with Active Directory and Exchange on-prem, which worked something like this:

It’s a cmdlet that looks up both the AD User account and its corresponding Exchange mailbox, returns a combined object, displaying some common attributes and with the full original objects as members.

Such a cmdlet has many advantages:

Once completed, Get-MITUser will function something like below. (Please forgive me for not using the exact correct flowchart symbols) 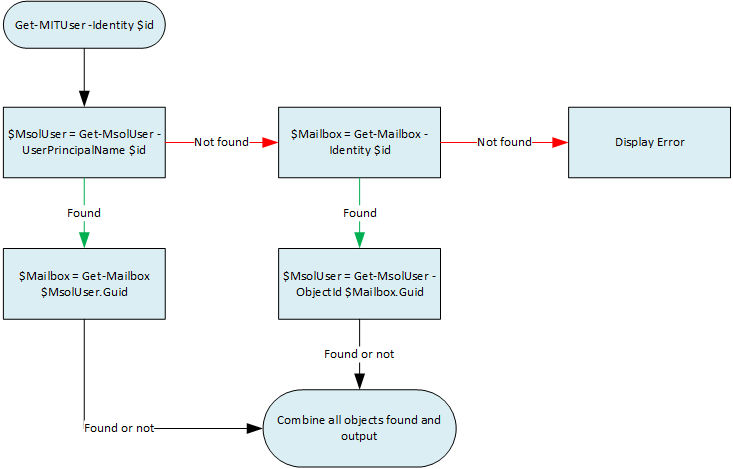 Articles in this series